Arrival to Tehran at late night, transfer to hotel.

Late breakfast, then a tour of the capital of Iran, located on the slopes of the Alborz mountain range. Tehran with over a dozen million inhabitants is the largest city in the Middle East and the most cosmopolitan city in the country. We will visit the main attraction of the capital - the Golestan palace complex, inscribed on the UNESCO list, where we will get to know the splendor surrounding the Shah's family. We will stop at the Freedom Tower - one of the most iconic icons of the city, we will also see ubiquitous murals presenting the point of view of the Islamic Republic of Iran on various socio-political issues. We will also see one of the excellent Tehran museums: National Museum or Carpets. We also go to the observation platform on the Milad tower, from where it's easy to see how large the city is in Tehran. Return to the hotel. Lunch or dinner on this day. (Route: approx. 100 km)

After breakfast and departure, we will head north towards the Caspian Sea. On the way, we will stop at the town of Rudbar, known in Iran for its marinades. You will be able to buy local specialties: lavashak - pressed fruit sheets, or pickled olives in nut and pomegranate. Then we will go to Masuleh, passing the green tea fields. Located on the steep slope of the Talesh mountain, surrounded by lush forests, the village impresses with its views and buildings. The thicket of honey and gold houses hides a maze of streets and passages leading to observation terraces on the roofs; everywhere there are intimate restaurants and traders selling handicrafts and spices to shopkeepers. After your free time, drive to Bandar-e Anzali for an overnight stay. Lunch or dinner on this day. (The route is about 480 km)

After breakfast and check-out, a morning walk to the famous Rudkhan castle with 65 defense towers. Nestled amidst unbelievably green hills, the fortress boasts an amazing history dating back to the times before Islamic. In addition, the location away from the important routes meant that unorthodox Shia movements could develop here. The entrance to the castle requires a thousand steps, but the persistent walkers will enjoy the eye with beautiful landscapes and fantastic architecture of the building. Then we will go on the way along the coast of the Caspian Sea to the border with Azerbaijan. After passport and customs formalities, we will travel to the city of Lankaran. Accommodation in a hotel and overnight. On this day, lunch or dinner (route about 310 km)

After breakfast, transfer to the capital of the country, Baku. It is the largest city on the Caspian Sea, where a quarter of the population of Azerbaijan lives. Baku owes its development to oil deposits, its wealth manifests itself in modern buildings surrounding the historic center. We will start with a wonderfully restored Icheri Sheher - the Bakir Old Town, where we will take a close look at its symbols: the Virgin's Tower from the 12th century, Palace and the Caravanserai. We will see from the hill the panorama of the city amphitheater located in the bay, a promenade stretching along the coast. We will go through the dazzling street of Nizami, we will also see the Fountain Square. Then, accommodation in a hotel in Baku or neighborhood and overnight. On this day, lunch or dinner (Route approx. 290 km)

After breakfast, we will see the greatest attractions surrounding the Azerbaijani capital. We will stop in Gobustan with prehistoric rock carvings documenting the life of the former inhabitants of this area. We will also have the opportunity to approach the unique mud volcanoes. We will take a route through the oil fields to the Absheron Peninsula and visit the fire temple of Atashgah, the sacred place of Zoroastrians. We will finish our visit at the unusual "burning" mountain Yanardag, from which natural gas has been evaporated for thousands of years. Return to the hotel, free time and accommodation. On this day, lunch or dinner (route about 80 km).

After breakfast, we'll go deep into the country. Our first stop will be harmoniously integrated into the vertical wall of the rock mausoleum of Sheikh Diri Baba in the village of Maraza. The architecture of the object uses the symbolism of geometric figures in an interesting way, and the place itself emanating spirituality has become a legend. Then we will get to Shamakhy - a city with a rich heritage, which over two thousand years of its existence has often become an arena for major events. We will see there a magnificent, historic Friday Mosque, a nostalgic cemetery of Yeddi Gumbaz, as well as the family tombs of Shirvan Shahs. Next, we pass the canyon of the Girdimanchai River to the ancient village of Lahij located far from the main routes. The place is known for its characteristic, perfectly preserved buildings and handicraft workshops specializing in copper products and carpet weaving. In Lahij we have a chance to see how the traditional technique is made of copper trays, plates, jugs and spells. Transfer to Shaki for an overnight stay. On this day, lunch or dinner (route about 350 km)

After breakfast and check out, we visit Shaki. It is one of the more charming cities of Azerbaijan; located 700 m above sea level, surrounded by mountains and oak forest, reminiscent of an ancient amphitheater. It was known as an important point of the Silk Road. Former rulers - the Khan, placed here in the eighteenth century their summer palace in oriental style, one of the most valuable and the most magnificent in this part of the world with unique frescoes and stained glass windows. We will also see a caravanserai - a former inn for caravan merchants. Then travel to the Azerbaijani-Georgian border, passport and customs clearance. Access to Tbilisi, accommodation and accommodation. On this day, lunch or dinner (Route approx. 290 km)

After breakfast, we will go to visit the capital of Georgia, Tbilisi. We will pass the elegant Rustaveli Avenue, passing among others dazzling edifice of the Opera House and the old Parliament and take a walk around the Old Town. We will see, among others golden statue of Saint. George, Sioni church cutting one of the most sacred relics of Georgia - the cross of Saint. Nino, Maidan Square, as well as countless houses with openwork balconies. We also take the cable car to the Narikala fortress, from where one of the most beautiful views of the city is located, we also go under the famous Tbilisi baths. Then we set off for Mtskheta, the capital of the ancient Kingdom of Iberia, and today one of the most visited places in the country. We will stop at the lookout point at the church of Jvari, from where a view stretches, which delighted Russian romantic poets. In Mtskheta, we will visit the temple of Svetitskhoveli, until recently the seat of the Patriarchs, in which many valuable relics and icons have been gathered. Return to the hotel in Tbilisi or the area for an overnight stay. On this day, lunch or dinner (Route about 80 km)

After breakfast, we will set off towards the High Caucasus with the winding, mountainous Georgian Military Road. The first stop will be a lookout point at Ananuri fortress located on Lake Zhinvali. Then we will reach Stepantsminda (formerly Kazbegi) - a town located at the border with Russia. In good weather, from here there are wonderful views of the Caucasus peaks: we have a chance to see the Kazbek massif of 5033 meters above sea level. Here we will switch to off-road vehicles and drive to the church of Gegeti. Photographs of this 14th century temple are the pride of all Georgian albums and guides. Lunch during the trip. Then return to the hotel near Tbilisi for an overnight stay. (The route is about 300 km)

After breakfast, check out from the hotel and drive to the border with Armenia. After customs and passport check-in, we will visit the Haghpat monastery complex from X -XIII century, which is an example of the finest Armenian medieval architecture. Then we will go on a tour of the next monastery complex from the 10th century - Sanahin. These two complexes (inscribed on the UNESCO list) were scientific centers, where humanities were taught, scholarly discussions were conducted, and scientific papers were written. Then drive to the Sevan Lake, high in the mountains called the emerald of Armenia. It is the second largest freshwater mountain lake in the world, located at an altitude of about 1,900 m. visiting the monastery Sevanavank from VIII - IX century. The so-called "Black Monastery" was, according to the transmissions, a place of high-born banishment as well as sinful clerics. Women were not allowed here. Transfer to the hotel in the Tsaghkadzor area for the night. On this day, lunch or dinner (route about 250 km).

After breakfast, we set off into the mountains of Gegham, to the partly carved in the rock of the monastery Geghard, called the Spear Monastery, because according to the records kept in it the spearhead Longinus, which pierced the side of Christ on the cross. Today, one of the more eagerly visited sacral objects in Armenia, initially served as a pagan temple, associated with a cave of water emerging inside the cave. Then we will go to Garni, where we will visit the ruins of the summer palace of the kings of Armenia with the rebuilt temple of the god Mithra. It is the only object of this type in the entire former USSR. In the early afternoon, we will travel to the capital of Armenia, Yerevan, where we will take a walk around the city. We will start with Kaskad - an interesting urban plan, before which the sculpture park was organized in the open. From there, we will go past the Opera building to the Northern Boulevard, the representative promenade of the capital. After the free time, we will go even to the monument of the Armenian Genocide of 1915. Transfer to the hotel for the night. On this day, lunch or dinner (Route about 80 km)

After breakfast, check out from the hotel (until 10.00). Then transfer to the airport in Yerevan and return. 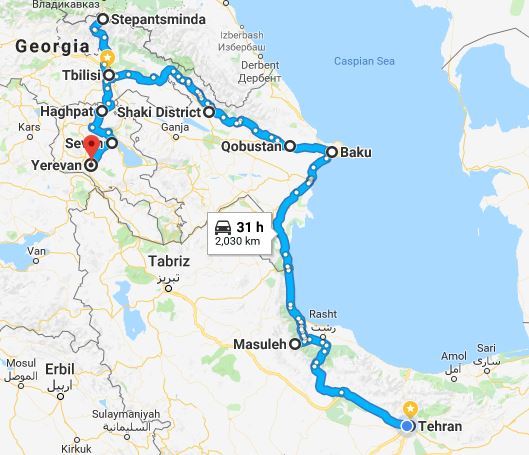 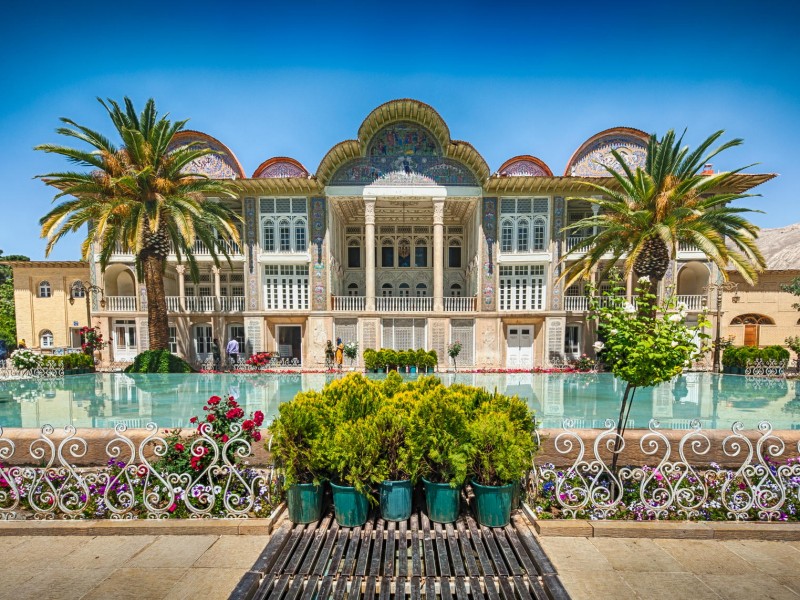 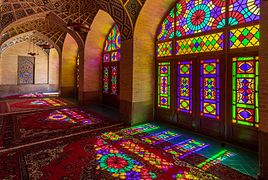 Iran – North and Center for Summer 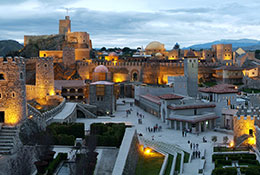